Patronus magazine is a spiritual successor to PA-magazine and is a gentleman’s magazine published in the Commonwealth of the State of the Union game sometimes after the players succeeds in overthrowing the feminist Premier. 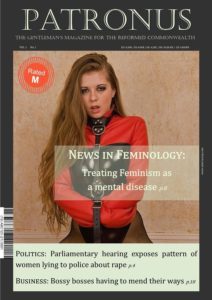 From the editor desk.
In which an elder statesman remind his fellow citizens that we should not blame womankind for the narrowly avoided social and cultural disasters of runaway feminism but rather look in the mirror. To avoid the mistakes of the past he also reminds us to always be firm but never be brutal when dealing with the danger of resurgence feminism.

Politics: Parliamentary Hearings Expose Patten of women lying to police about rape.
Discussing how the careers and reputations of breadwinners and family men are at risk from vengeful or self-deluded women crying rape and what can be done about it.

Health & Care: Treating Feminism as a Mental Disease
A paradigm shift is underway in how to deal with women suffering from female independence syndrome. Treatment rather than punishment is the way forward according to the Commonwealth Society of Psychiatry

Feminology Monthly: Disciplining our Daughters.
The monthly column from our feminologist discusses some of the issues in raising dutiful well-adjusted and happy daughters. It is precisely because we love and treasure daughters that we have a duty to insure they receive the discipline and guidance they need and deserve

International: Italian Policewomen get High Heels – But in the Wrong Size
Putting Italian policewomen in proper feminine heels was a good idea. Letting a woman be in charge of placing the order less so.

Business Trends: Life imitating arts as bossy bosses having to mend their ways.
The shrill, petty female boss getting her just comeuppance has become something of a stereotype. This article explains why they can’t help their female nature and offers advice on how to help them to adjust.

Law & Order: Police department expand controversial live-tweet of “harlot control”
Unruly, disrespectful or lewd behavior should never be tolerated in the weaker sex and a certain level of no-nonsense firmness is necessary when dealing with prostitutes.